A prominent regeneration site in the town centre of Sleaford, Lincolnshire, the proposed building will provide 16,000sqft of retail and office space.

The brief was for a landmark commercial building that would be flexible to meet the future demands of several potential retailers and office users. The design was developed in close-collaboration with officers from Development Management, Conservation and Economic Development at North Kesteven District Council.

The scheme draws upon the architectural quality of numerous local 18th and 19th century buildings, many of which are listed. It does this in terms of both its urban design and appearance.

The building is designed to maximise street-facing frontages and it is set-back on one side to provide a wider footpath to the ‘High Street’, thus improving the public realm.

Where the existing buildings lack a suitable urban scale for such a prominent corner site, this is addressed in the proposal by placing the tallest parts of the building on the corner and around the street-facing edges of the site.

A short colonnade allows the building to step-out on the upper floors, thus maximising the floor area on the one hand, whilst making the building more visible from Sleaford railway station on the other; a key gateway into the town. The colonnade also provides an opportunity for an external seating area to one of the retail units on the side of the building with less vehicular traffic.

The columns that form the various facades of the building are adjusted on each elevation and on each floor in terms of their size and spacings. This is for practical purposes for things such as delivery areas for example, but it also gives the building a visually clear base, middle and top and adds depth and character to the elevations. The pre-cast concrete elements which form the façade will be pigmented in ‘buff’ colours; a contemporary reference to the historic stone and brick buildings within the town centre. 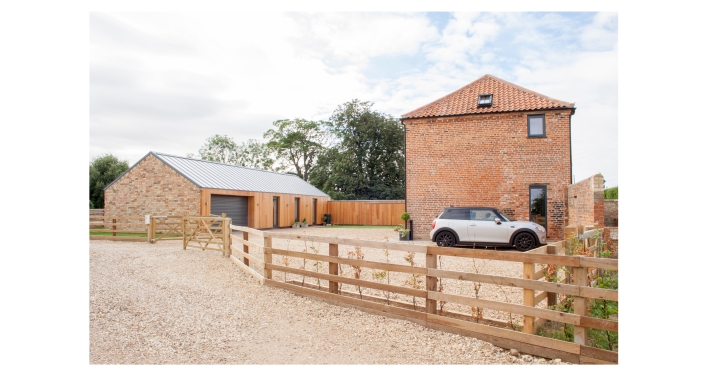 Due to complete in 2019, within the curtilage of a Grade II* Listed Building we have created three new family homes by converting a group of existing farm buildings; one of which is separately Grade II Listed.

Also in this section